It’s been over two years since we released IN RIBBONS onto the festival circuit, and we have enjoyed the many accolades and awards that it has gathered along the way. It has been an amazing journey, and we are delighted to announce that our film is now available to view at this link: 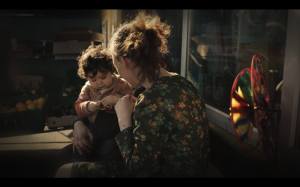 We hope you will check it out and let us know your thoughts. An Independent production, IN RIBBONS is written by Caroline E. Farrell and directed/edited by Marie Valerie Jeantelot, with line production and set design by Tom Dowling, sound and music by Neil Horner and cinematography by Basil Al-Rawi. The theme of the film is resilience and through a highly visual and sensory narrative, tells the story of a little girl’s journey to an orphanage in 1960’s Ireland. 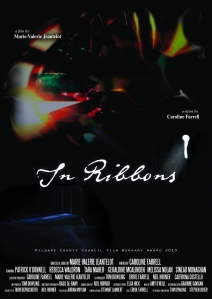 Once again, we sincerely thank everyone who got involved in helping us along the way. We could not have made IN RIBBONS without our talented cast and crew and our many supporters who contributed to our Indiegogo Campaign. We would also like to thank Kildare County Arts Service for the 2013 bursary that helped enormously to get our production up and running. 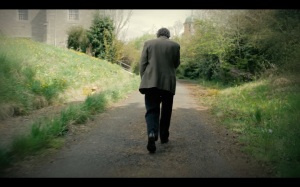 Delighted in me bones that IN RIBBONS will screen at the prestigious Women Deliver World Conference 2016, which takes place in Copenhagen, Denmark from May 16th – 19th. This global conference unites thousands of world influencers, policymakers, activists, journalists, and young people from over 150 countries to spotlight solutions and focus on how to make the Sustainable Development Goals (SDGs) matter most for girls and women. Founder Jill Sheffield and CEO Katja Iverson articulate concisely the aim of the conference, “Our message is simple and powerful: Sustainable development is possible only when girls and women are healthy and thriving. Women deliver so much more than babies. They deliver for themselves, their families, their communities, and their societies. When you invest in girls and women, there is a ripple effect and everybody wins.”

Screening at the Arts and Cinema Corner, an initiative which aims to transform a section of the conference into a creative space for showcasing international artists and creative work, I can’t articulate enough what an absolute honour it is for all involved to be part of a conference that advocates for women’s rights, health and well-being in such a prestigious and meaningful process. And it is such a credit to the conference organisers through their recognition and showcasing of how the medium of film can have a place in expressing the profound and the important through the universal language of visceral image and action. The only Irish film to screen amongst an amazing selection from all over the world, it will be shown on Wednesday,18th May. In addition to lunchtime workshops with world-renowned directors, producers, and poets, partial film screenings will run consecutively throughout the three days.

An Independent production, part personal money, part crowdfunded and also part funded through a bursary award from Kildare County Council Arts Service, IN RIBBONS is beautifully directed/edited by Marie Valerie Jeantelot. Starring Patrick O’Donnell, Geraldine McAlinden, Melissa Nolan and Rebecca Waldron, line produced and set design by Tom Dowling, sound and music by Neil Horner and cinematography by Basil Al-Rawi, the theme of the film is resilience and through a highly visual and sensory narrative, tells the story of a little girl’s journey to an orphanage in 1960’s Ireland. The film continues to screen at festivals worldwide and has won coveted awards including the Jury Prize at the Worcestershire Film Festival 2015, Best Experimental Film at both the Los Angeles Cinefest, February 2016 and The Seadance Film Festival, Spain 2016, and was also awarded Best Director [Marie Valerie Jeantelot] and Best Sound [Neil Horner] at the Wolves Independent IFF in Lithuania, 2016.

More information on the conference can be found on their website

So how did you spend your May Bank Holiday Weekend? 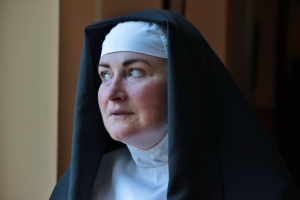 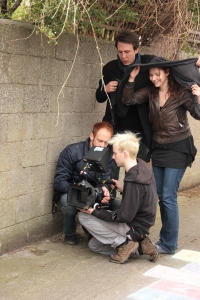 IN RIBBONS has wrapped! THANKYOU zaps to the brilliant cast and crew that assembled and worked so diligently to visualise my script into something that we all believe will be quite wonderful…and very beautiful. Thanks also to our extras, to building managers for the sanction of our locations, and to everyone who invested in our project. Donations have ensured that we have been able to pay up-front, or to pledge fees for work done, all of which will be honoured by the producers. Keep an eye on our Facebook page for more updates: https://www.facebook.com/inribbonsmovie

Once upon a time, in an era of spirographs and sheena dolls, when ‘Hey Jude’ was the hit song of the day, there lived a very little girl.

A creature of quietude and intensity, she looked to the grown-ups and found that they didn’t make any sense to her, with their secrets, their muffled conversations and their lengthy silences.

Not that she was a big talker herself, but she listened, a lot…

She liked to be in her room. Alone. This was her imagination place, where her doe-eyed teddy bears and smooth-skinned dolls listened patiently to her made-up stories, and starred centre-stage in her made-up games.

And then, one day, everything changed…

In Ribbons is a journey. A dark fairytale, a cautionary fable and a glimpse of social history that captures the zeitgeist of a time probably best left to history…

We are now into the second phase of our fundraising campaign to make this short film, written by yours truly and to be directed by the very talented Marie-Valerie Jeantelot. So far, we have raised $1090, which amounts to €817. Less Indiegogo charges of 9%,  the final amount raised during this first phase was €743. With a dedicated cast and crew willing to give their time and unique talents, we are eternally grateful to our supporters / donors who have already dug deep and helped us out with their contributions. Because of their generosity, already,  Marie-Valerie and her crew have been able to use some of this money to carry out a test shoot which resulted in the following new trailer:http://vimeo.com/58193801

We are now openly seeking donations again, no amount too small or too large, to make up the remainder of the €3,500 that we need to complete In Ribbons. The money will be used to pay cast and crew, and to cover insurance and hire of equipment, transport, catering, sets, costume and location fees. Please check out our website here:http://www.inribbons.com/

If you have already given us some of your hard-earned cash, once again, we thank you. You are now fully-fledged members of the In Ribbons tribe…if you’d like to donate, we thank you in advance, and please do check out the goodies that could be winging your way, should you decide to help us out…

It has been a while since I posted an update on my film-making journey and the learning process I am currently undergoing.

First off, the short film of my script, ADAM is now in post, though for unforseen circumstances, there has been a bit of a delay in moving it forward. It’s still happening…but is just going to take a little longer than we initially planned for. The good news is that cutting my teeth on this production of ADAM has cemented my Gra (for my international friends, that is the Irish word for love!) for making films, and in particular for getting involved in the development side of my own writings from script to screen.

From a producer’s point of view, I now know what I am capable of; what is doable, and how to do it, so I have to thank my co-producer and the director of ADAM, Denise Pattison, for firstly, putting her own money into developing my work, and secondly, for letting me anywhere near a film set!! My family, and especially, my better half, Errol, whom deserve olympian-sized medals of praise for their unconditional support of my initial ‘toe in the water…if I don’t sink, I’ll friggin float’ approach! And to the amazing cast and crew who liked my little script enough to want to be a part of the making of our film.

And moving forward, I am delighted to announce that another short script of mine, In Ribbons, is going into production in October of this year. A script that touches on the themes of identity and disconnection, I describe it as much like a ‘soul friend’, In Ribbons is a ‘soul’ story, and my biggest wish for it is this; that, without falling into the cliché of sentimentality and woe, it will resonate with the fighter…the warrior survivor…that is inside all of us.

I have a feeling, that with the gifted foresight and sensitivity of director, Marie-Valerie Jeantelot, In Ribbons will look and BE amazing, and I can’t wait to work with her, as co-producer, and later, as audience member, sitting in the back row, and seeing this finished and no doubt, most beautiful piece of film.

We have gathered the most stunning examples of Irish film-making talent around for this short film, all agreeing to climb aboard from the word go, and in order to pay this wonderful cast and crew, we have launched a fundraising campaign on Indiegogo:

Here you can meet the cast and crew and keep updated on our progress. If you’re not on Facebook, we will be keeping all our supporters informed of our progress through the Indiegogo page. Please check it out and if you can help me, and indeed, all of us, along this journey, I will be forever grateful.