What an incredible weekend for FRAMED, picking up the ‘Best Short Horror Film’ award from Underground Cinema Film Festival! Very honoured to be in the company of some fantastic filmmakers, and thanks to Dave Byrne and the Underground team for their continuing support of independent filmmakers, in Ireland and abroad. 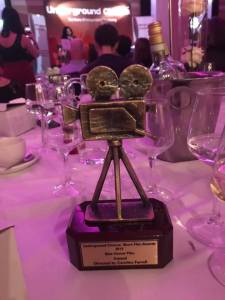 AND THIS from Devil’s Night Gallery Film + Art Event!

Devil’s Night Gallery is an independent film and art show which takes its name from its two inspirations. The first is “Night Gallery”, a classic, horror anthology television series, hosted by Rod Serling, from the ‘70s. The second is the aggressively independent spirit of the city of Detroit, represented by the ominous “Devil’s Night”. Like the namesake tv series, Devil’s Night Gallery features screenings of short films preceded by an introduction and the reveal of an original piece of art inspired by the film. Film submissions were received from around the world and were narrowed down to 10, from Michigan and beyond, which best represented the experience of the “Night Gallery”. A handful of amazing local artists were selected to create original works of art inspired by those same films. Just look at this incredible work – based on FRAMED – from artist Joyce Swope. Fantastical!!!