For the first time ever, Reading Gaol has been opened to the public, particularly poignant as it coincides with a magnificent Artangel – Inside: Writers and Artists in Reading Prison, an exhibition of new works that have been created in response to the prison’s architecture and history. Leading artists, writers and filmmakers that include Steve McQueen, Marlene Dumas, Nan Goldin, Robert Gober, Jeannette Winterson and many more have produced work that has been installed in the prison cells, wings and corridors.

At last I saw the shadowed bars

Move right across the whitewashed wall

That faced my three-plank bed,

And I knew that somewhere in the world

From ‘The Ballad of Reading Goal’ by Oscar Wilde.

I have to admit, it was a spine-tingling moment to stand in Prison Cell C.2.2. – no matter how much it might have changed (or not!) over the years since 1897 when Wilde was released from his two-year sentence. I also still find it difficult to believe that the prison was only closed in 2013!

For much of his time there, Oscar was not even allowed to write, but with a change of Governor, was eventually given access to enough paper to complete De Profundis, a letter written to his lover, Lord Alfred Douglas. 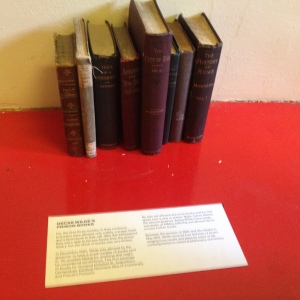 The books that Oscar requested and was eventually allowed to have in his cell. He deliberately avoided asking for any titles that might have been viewed as contentious.

You can check out further details of the ‘Artangel’ Exhibition HERE

What doesn’t kill ya and all that so it’s back to the work. Going old-school to decipher old-school cursive! And yes, matching #notebook #research #writerslife