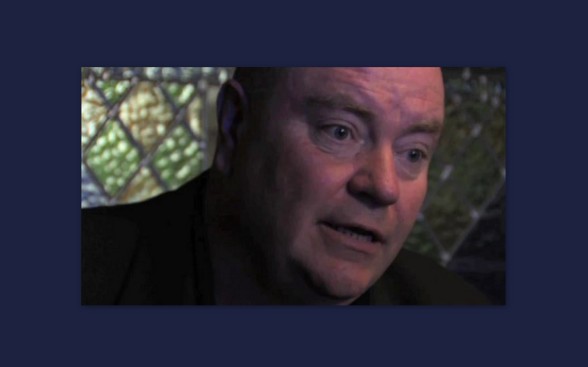 Len Collin was born in London and has lived in Ireland. He trained as a professional actor at Arts Educational Drama School, London and is also a production and Direction MA graduate of the Huston Film School, Galway, Ireland. Len started writing for the theatre in the early nineties. His award-winning play Box, set during the first Gulf War and WWI, brought him to the attention of TV producers and he began writing for that medium. In 2010 he wrote, directed and produced the award-winning Irish web series Covies and he has written for several TV shows, including Holby City, Casualty and London’s Burning.

Welcome Len. Your writing credits are quite impressive – so where did it all begin?

I’ve always written, from diary entries as a teenager to bad poetry. At drama school I began to write scenes and then plays. Eventually screenplays. I started writing seriously after leaving drama school. I’d write plays when I wasn’t working as an actor… seven years later I wrote Box, which won a national competition in the UK, and kick started my writing career. After the success of Box I got an agent and was invited to write for two TV shows. The Bill and Families. Drama is my genre. Within that at one time I specialized in crime stories. However I tend to just be interested in justice and injustice. I tend to write about bigotry and intolerance. I’m a Yes voter.

Did anyone – famous or not – inspire you to write?

I think all writers are influenced by other writers. My influences range from Stan Lee to Sean O’Casey. The Silver Tassie was a particular influence as well as Shadow of a Gunman. Spiderman comics were really just storyboards…I loved the humour. Joe Orton, Tennessee Williams, Tony Marchant, Budd Shulberg, Charles Bukowski and more recently Charlie Kaufman.

And is there a film script by another writer that you wish you had written?

Withnail and I – Bruce Robinson.

With regard to screenplays, how long does it take you to complete a script?

The fastest I ever wrote a first draft of a one hour broadcast screenplay was twenty-two hours. It was surprisingly good. But writing is all about the rewrites, so I have written good material that took a week and other good material that has taken years. I have no idea why that happens.

You mentioned that you have an agent, Len. Do you think it necessary to have one?

Yes. A good agent makes all the difference.

What’s your opinion of the current world of film and writing?

Nationally, I think Ireland struggles to find a voice. I really admire Terry McMahon (Charlie Casanova. Patrick’s Day) for his work. He has something to say and he says it, and that’s what writing is all about. But I despair at the lack of rigour when it comes to screenwriting in general. There is no excuse for lazy writing.

Internationally, the market is dominated by facile superhero movies (Remember I like Stan Lee) I cannot get excited by another Superman reboot or Avengers Go Shopping in Supervalu. Then you get a drama like Birdman – which is good but gets over hyped because there is so little intelligent drama out there. In TV everyone now believes slow is good so we have British and American shows aping the Scandinavian dramas. Only the cable channels, and new online broadcasters seem to be taking risks… and what wonderful shows they have produced. Breaking Bad and Better Call Saul are particular favourites, and Netflix’s Lilyhammer. Love / Hate and Pure Mule seemed to signal a new era of drama for RTE, but perhaps that was just a blip. In my opinion RTE need to think more about international sales, so that we can do what the Scandies have done and export our stories.

Do you place any importance of film competitions and awards?

And your thoughts on Indie Film?

Indie film is very important. Equipment is cheaper and better now than ever. Buy a DSLR and Tascam and go out and shoot a movie. Yes most of your efforts will be mediocre or worse…but you will learn…and then there is always the chance that your next movie will be the catalyst for your career.

Have you ever considered self-publishing, funding or crowdsourcing?

I have considered self-publishing a novel I have written. E readers are ubiquitous, and there are gems. The problem is the advertising. How do you market your novel? It’s a vast ocean.

What are your feelings on social media as a marketing tool for writers and filmmakers?

Writers have to learn how to use social media… we all have two personalities now… our online and our real. I try to keep my online persona as close as possible to my real persona to stop me going insane. That way I make sure I never say anything online that I wouldn’t say in person. But social media is here to stay… and we have to use it.

If you’ve ever had any – how do you handle negative reviews?

If you produce enough work you will get good reviews and bad reviews and you should treat both imposters the same. Only you can judge your work at the end of the day, and you will always be your own harshest critic.

Any advice for aspiring writers?

Keep notes. Write down the names of people you meet, who they are and what they do. What you think of them. Read the end credits of films you like and don’t like…because if you are going to have a career you are going to work with some of these people – and for when you forget there is IMDb.

And write what you know? Agree or Disagree?

Can you share with us what you are working on now?

About to direct my first feature – Christian O’Reilly has written the script – It’s funny, thought-provoking and quite brilliant. It’s called Sanctuary – and the cast are mostly actors with intellectual disabilities from Blue Teapot Theatre Company in Galway.

And finally, name six people, living or not, that you would like to share your favourite beverage with…

Eamon Collins (He was killed by the IRA and wrote a book called Killing Rage. I tried to secure rights for it. He was brave and idealistic.) Charles Bukowski (Poet), Louise Brooks (Actress) my Dad (He died before I could ask him all the things I would want to ask him) Now I’ve realized they’re all dead so I’ll have to add fellow writer Ted Gannon and Edwina Forkin (our producer on Sanctuary) Because she really is the brightest, funniest person and if Bukowski was getting sulky on us she’d sort him out.