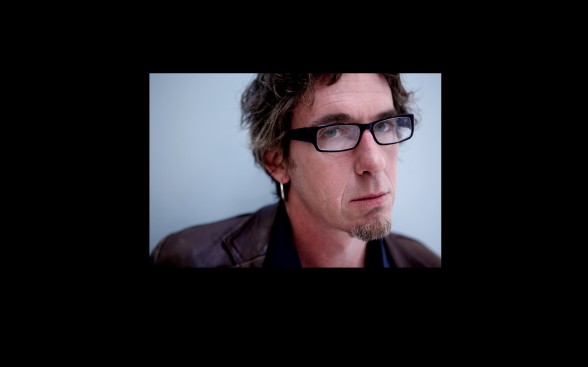 Peter Murphy is a writer, spoken-word performer, musician and journalist. His debut novel, John the Revelator was shortlisted for both the Costa First Novel Award and the Kerry Group Prize for Fiction. His second novel, Shall We Gather at the River, once described by Kevin Barry as ‘A wild inventive butt-kicker’ and by Metro as ‘Thrillingly unpredictable, if not downright malevolent’, was published in 2013. Peter’s band, The Revelator Orchestra released their second album The Brotherhood of the Flood in 2014. He is currently working on his third novel and a long-prose poem.

Have you always been writing in one form or another, Peter?

I wrote stories and essays in school for English assignments, mostly inspired by the stuff I’d had my nose in since I was eight or nine: comics like Starlord and 2000AD, and everything Stephen King wrote up to 1984 or so. After I left school I played drums in bands for nine years. I started hustling as a freelance journalist when I was about 26. All through my 20s I was sporadically writing stories and the odd stab at a novel, but I didn’t really knuckle down until I was 30 or so.

And your initial publishing break?

The journalism happened pretty fast: soon as I started submitting reviews and features I got published. But with the fiction, I put in about a six-year apprenticeship before I had a book accepted for publication. An acquaintance suggested I send Marianne Gunn O’Connor a sample of my stuff back in 2001. That was early days, and I was still pretty raw, but she saw some potential. We met in Spring of 2002 and she became my agent for the next 12 years. I finished John the Revelator and handed it over in April 2007. Marianne sold it to Faber that August. When I got the news I went out and had a beer and tried to take it all in. It was the best beer I’ve ever had.

I get mixed opinions as to whether an agent is necessary – thoughts?

And do you personally contribute to the marketing and PR of your work?

I like the creative side of it. I’m sort of a performer as well as a writer, so I enjoy readings and public events. I’m pretty invested in the visuals: Angus Cargill, my editor at Faber, was very good at giving me input into the first two books’ covers and design. Funny though, I remember when myself and a couple of friends made a promo clip for John the Revelator, certain reviewers were muttering about ‘the might of Faber’s publicity machine’. We thought this was hilarious. We made it on a budget of about thirty quid. I’ve since collaborated with the brilliant Colm Russell on book trailers and performance clips. I did musical/performance adaptations of the first two books with The Revelator Orchestra, and we released two albums, The Sounds of John the Revelator and The Brotherhood of the Flood.

Do you think that social media, as a marketing tool, is useful?

I find it useful for getting the word out about live shows and readings, but it’s no substitute for real-world publicity or marketing of books. As I understand it, a proper publicity campaign involves TV, radio, magazine and online press and ads, billboards in tube stations, posters on buses, displays in book shops. Unless you’re prepared to make social media stuff a way of life, to the detriment of your work and sanity, it won’t help sell diddley squat, bar one or two e-books, for which you’ll be paid a pittance. I made a resolution this year: with rare exceptions, I won’t do anymore email interviews instead of phoners or face-to-face, and I won’t write anything for free in the name of ‘exposure’. I might consider doing some form of online creative project or blog over the next year, but only if I’m as driven to do it as I am by an idea for a book.

Who inspires you, Peter?

And how does your love of music influence your work?

Primarily through rhythm. Rhythm is everything. It drives every line in Shall We Gather at the River. Also atmosphere. Very often I’m trying to nail a feeling that I’ve heard in a song or a piece of music, translating it into language.

In terms of genre, how would you describe your writing?

I’ve been told I’m sui generis, which is a fancy way of saying I’ll steal from anyone. My stuff tends to get categorised as literary fiction, but I love the atmosphere and language of noir and southern gothic, the philosophy and ideas of sci-fi, the plotting and dialogue of crime novels and modern westerns.

And when immersed in the work, how long does it take to finish a book? And how do you manage your writing time?

As long as it takes. Depends on what’s on the slab. I use the local library as my office, so I start at 10.30. If possible, I’d start at 9. On a good day I go until 5.30, with a couple of short breaks. No phone calls or correspondence before 3, if at all possible. I work Monday to Friday. Regardless of what’s produced, I have to put the hours in.

There’s been a lot of debate in the press of late in relation to negative reviews. Any thoughts on how writers should handle them?

Reviewers are readers with megaphones. I appreciate any close reading, but by the time a book of mine is published I’ve put everything I’ve got into it, so that horse has bolted.

And on literary competitions and awards?

If they generate money, sales or publicity, great.

A shift of change seems to be going on in publishing right now – how do you see it?

The Irish scene is thriving. Loads of great writers and indie publishers. Mainstream publishing could use an overhaul. I think big publishers acquire too many titles in the vague hope that something will stick. Of those titles, say, 50 in a given quarter, the marketing and sales departments will select a couple that they think will sell. These get the big push, and the rest are just sort of orphaned in the wild. I believe there’s an audience for most good books, but sometimes it’s a question of taking the time to locate a niche instead of trying to blindly sell something to everybody.

And on Indie publishing?

Indie publishers can be bolder than majors, and can move faster. Indie or major, I think it’s important to have a good team behind you: readers, editors, proof-readers, publicists, sales people.

Would you consider self-publishing?

If it came down to it, I’d rather put the work out myself than sit around waiting for someone’s permission.

Is there a book by another writer that you wish you had written?

Where do I start?!! Where do I stop?!! Blood Meridian, The Violent Bear It Away, The Third Policeman, The Postman Always Rings Twice, The True History of the Kelly Gang, Riddley Walker, Burning Chrome… And I’d love to have written Night of the Hunter (the film and the book), or Dr Strangelove, or Blade Runner.

Write what you know – agree or disagree?

I say write what you can imagine and let reality take care of itself. All fiction is speculative fiction.

And any other advice for aspiring writers?

Put in the hours. Imagine you’re an athlete in training for a tournament. And once you’ve achieved a basic level of mastery, don’t ever work for free.

Thanks, Peter. Final request! Name six people, living or not, that you would like to share your favourite beverage with?

Any six characters from Deadwood.

Details of Peter’s books Here, and The Revelator Orchestra Here