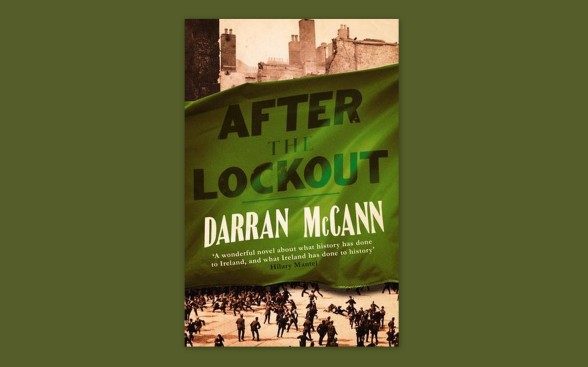 A series of guest reviews on inspiring work, old and new: Orla McAlinden reviews After the Lockout by Darran McCann

Most debut authors could only dream of having a cover quote on their first novel from Hilary Mantel, and here’s what she has to say about After the Lockout: “A wonderful novel…deeply intelligent and self-aware…entertaining…” I’d have to agree with her, it’s all of those things.

The early chapters are set in the Montgomery Street brothel district of Dublin in 1917, in a city that is wracked with social and political strife. The “Lockout” of 1913 looms large in the past, when the commercial and manufacturing heart was torn out of the city’s working class by the ruthless crushing of a mass campaign of strike action against starvation wages and job insecurity. For a detailed fictional account of the Lockout, you can’t get better than James Plunkett’s “Strumpet City”, but McCann explains enough of the bare bones of the history to allow a reader to grasp the severity and the cruelty of the crushing of Dublin’s nascent Labour movement.

The remainder of the narrative then moves to the village of Madden in Armagh, whence the protagonist, Victor Lennon, has fled, 10 years previously, after the suicide of his mother, and the refusal of the local Catholic hierarchy to grant her a Christian burial. Victor is a socialist, a Marxist, a veteran of the Lockout and much more importantly as far as the almost exclusively Catholic population of Madden is concerned, a veteran of the Easter Rising of 12 months earlier and a hero of Irish Republicanism.

Is Victor going to find out that his idea of a socialist, secular republic doesn’t suit the notions of the orthodox Catholic population of Madden?

The male characters in this novel are well drawn and well realised. I particularly enjoyed the character of Bishop Stanislaus Benedict, who I was feared was going to be yet another in a long line of Irish Catholic Priests I have read recently, upon whose malevolent shoulders rests every ill in Ireland since the marriage of Aoife and Strongbow. Instead, he reveals himself as a very complex, well developed character, with his own history of suffering, and a large dollop of compassion, although administered severely, and tempered with the morals and mores of his time. There is no doubt that the Catholic Church is the villain in this novel, but the character of the Churchman himself is nuanced and sensitive.

There are really only three female characters, unless we count the deceased mother of Lennon, and I think it’s understandable, given the nature and the topic of the novel that there are more men than women. I like the put-upon housekeeper in the Parochial House, she’s bursting with authenticity. The contrast between the two other females is rather too black-and-white.

I learned a lot from this book, in a very enjoyable way. There is a plethora of fiction relating to the 1916 rising, and to the Civil War, but this is the first novel I have read dealing specifically with the period of ratcheting tension prior to the War of Independence. Although Victor sometimes speaks a lot of exposition, and occasionally speaks like a political pamphlet, I can’t think of any other way that so much political history and background could have been included in a work of fiction, and I know I benefitted from having certain elements of the backstory explicitly explained, even if it made the dialogue occasionally clunky.

Publisher details for After the Lockout Here

Orla McAlinden is an Irish writer and book fanatic. Her debut collection of short stories The Accidental Wife will be published by Sowilo Press, Philadelphia in August 2016 and her novel The Flight of the Wren was chosen for presentation at the Greenbean Novel Fair, 2016. Orla is the recipient of the Cecil Day Lewis Emerging Writers Bursary. and blogs about books and writing at www.orlamcalinden.com