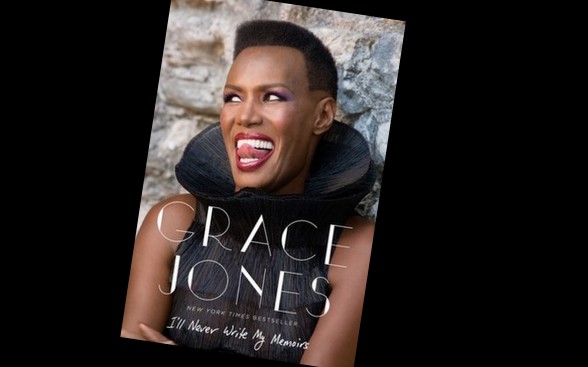 Grace Jones epitomizes the avant-garde movement of fashion and music in the 70’s and 80’s. Iconic and influential for her striking gender-defying beauty and theatrical flair for all things experimental, I’ll Never Write My Memoirs is as honest as it is compulsive – an insightful glimpse into her extraordinary journey from early beginnings in Jamaica to the heights of fame in Paris, New York, London and indeed, the world! Enduring a childhood that was controlled by a brutal disciplinarian, yet always loyal and loving to her family, Grace, without self-pity or fear, moved out of that strict, religious upbringing to make a remarkable life for herself. No excuses and no apologies, she tells it like it was – as she remembers it; turbulent, provocative, extreme.

‘My goal was never to be controversial for the sake of publicity, of self-promotion. I wore what I wore – or didn’t wear – and acted like I acted because it was who I was, and I was making myself into a performance. I acted the same way before I was famous. I did it when I was a no-one, when no one was looking, and I would have kept doing it even if I had stayed a no one. The craziness is there. I went to extremes. That didn’t come with fame. It became part of fame, because that was already me. It was how I learned to guard my body from evils. The craziness was the fire I lit to keep danger at bay.’

The standout theme of this memoir is her integrity throughout. No matter how wild and crazy life became, or becomes, Grace Jones never compromises. Staying true to her identity, her uniqueness, her legacy. It’s hardly surprising that some of her most iconic images have influenced, and been imitated by the likes of Rihanna and Kim Kardashian, but Grace was there first, the innovator through her collaborations with Helmut Newton, Jean Paul Goude, Andy Warhol, Issy Miyaki and so many more. Her philosophy on body image and aging is empowering – while she loves the idea of metamorphosis in her performance, of her persona being infinitely malleable, able to transmit that notion that anything is possible, she does not place any importance on age and states that she would never consider cutting herself to pretend to stay young. Stripping back prejudice, rejecting normal, she is the ultimate feminist – just don’t call her Diva – call her Jones!