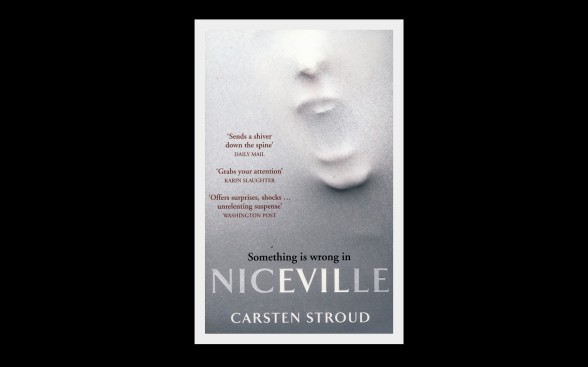 “… a city of around ten-thousand people, a Forties-style Deep South town with live oaks in the shady squares, Spanish-moss hanging from the branches, blue-and-gold street cars rumbling over the pavements, the down-town streets stitched together by overhead power lines and trolley wires, graveyards for the Confederate Dead and those misguided Union boys …”

Niceville, it is not, neither the novel, the town, nor most of the people that reside there, so for the purposes of a chilling read, it does exactly what it sets out to do. Part supernatural, though mostly crime driven, featuring the detective with a dark past, Nick, and his lawyer wife, Kate, sleuthing through overlapping narratives that are unrelenting as the evil contained within the title. A young boy goes missing, caught literally disappearing into thin air on a CCTV camera…and then turns up later in a most horrifying place, setting the tone for a narrative that is wicked and nasty. We then cut to a bank robbery…and the crime thriller element takes over somewhat…which makes the book unusual in the mixing of genres, and I would imagine that not everyone will like the mash of two differently themed plots entwined in this book – and there is so much else going on in it, that it’s good to remember that Carsten Stroud has created it as the first of a trilogy – consider it as a set-up for the other two.

Most of the people of this town are crazy, or evil, or both. And there’s something even worse lurking beneath the pit of Crater Sink…a large circular sinkhole, full of cold black water, no one knew how deep. Stephen Kings meets True Detective [season one!]