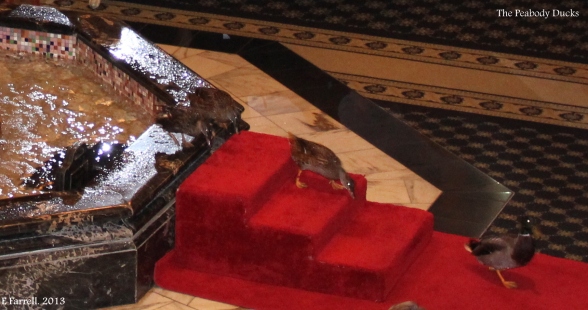 The Peabody, built in 1925,  is a beautiful hotel in downtown Memphis, Tennessee, famous for the Peabody Ducks that march daily from their home on the rooftop to swim in the fountain in the lobby.

The Duckmaster announces the arrival of the Ducks! Celebrity ‘Duckmasters’ at the Peabody have included Stephen Fry, Patrick Swayze, Kevin Bacon and Oprah Winfrey.

Each morning at eleven, the Ducks march from their penthouse on the roof of the hotel, via the elevator to the lobby. To a musical fanfare, they march across a red carpet, and step into the fountain, oblivious to the crowds that gather everyday to see them.

Happily waiting for the Duck March! I am easily pleased!!

Then, having had their daily swim, at five o’clock each evening, the ducks are ceremoniously led back to their penthouse home! The custom began in the 1930’s when the hotel manager, returning from a hunting trip, allowed his decoy ducks to swim in the fountain. The guests loved it, and the tradition was born!